Tourism becomes the miners new vein, when Lonely planet discovers the fascinating hardships of the silvermine. This lyrical documentary with social economical undertone, resists the temptation of interview.

In an observing way GRITO de PIEDRA (SCREAM of the STONE) gives an inside view of the lives of Gavino and Pedro Montes. Gavino is a miner in the Cerro Rico in Potosí, Bolivia. His son Pedro, a 23 year old student, works as a tourist guide in the same mine. Over the last decade, tourism has discovered Potosí and the fascinating hardships of the silver mine. Already, tourism has left its marks on the town and its people. 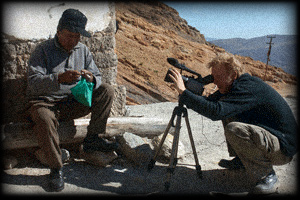 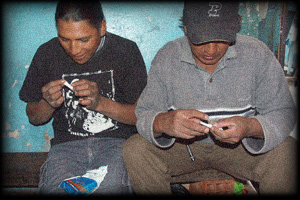 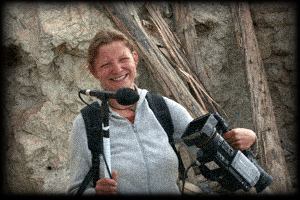 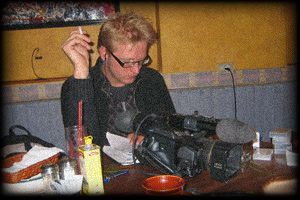 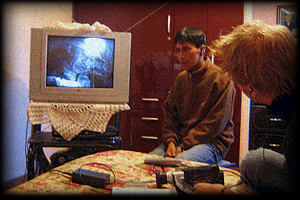 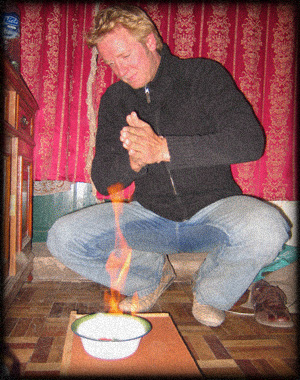 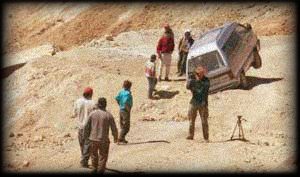 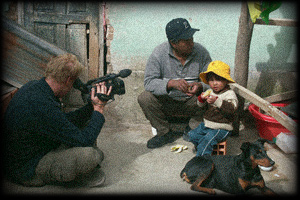 GRITO de PIEDRA behind the scenes

Gavino and me. We spent a lot of time together, which was needed to get the best result for the film. In the beginning he and his family were very much aware of me and the camera, but after a while I could start the real filming. In the end it was really difficult to ‘make an appointment’, because he and his colleagues were drunk most of the time (and nobody knew where they were.)

Miguel and Gavino are rolling a real Dutch cigarette that I brought from Holland.
Miguel is the brother of Inez (so that makes him Gavino’s brother-in-law). After Gavino’s first wife died, he remarried with Inez. Pedro (the tourist guide) is his son from his first marriage. Gavino and Inez have 6 more children of which Ariel is the youngest. He became three during the shooting.

To break the ice and to get to know the family, you sometimes have to literally play along. The children were playing ‘blind cow’ outside: a game where you get blindfolded and have to seek the rest. Everyone was very much enjoyed when the tall Dutch guy plays along. Gavino has nine children and I tried to exclude most of them from the film; otherwise it would have been much too complicated (for the viewer).

When Etienne (assistant) first left Potosí, Tanja took over. We had a lot in common and working together went amazingly great. She is a 29 years old Austrian girl that lived in Holland for the last six years to study anthropology. Supporting the film was a good experience for her and I could not have done this without her. When she left after a few weeks, Etienne took over again and there was still much work to do.

‘La Plata’ was my favourite restaurant in Potosí. It was too cold to work in the hostel, so I had to flee to bars or restaurants, that aren’t the best place to work. In this restaurant I spotted most of the material. Here I also discovered that crucial scenes were completely ruined, because of the dust in the camera. I tried to arrange another camera at the local television station. The only camera they had available, was an 1ccd home video camera, which I already brought myself. In the end, an air compressor combined with the 95% alcohol did the job and we could continue the shooting.

After more than 3 weeks translating (of sometimes 14 hours a day) I was exhausted. José Luis (in the picture) was the best translator out of seven that I had worked with. The first translators we worked with actually didn’t speak good Quechua. But because they wanted to make some money, they just created their own story and made something up. We had more than 22 hours to translate. Most of it was a ‘drunk- coca leaves- spanish- quechua mix’. Even Pedro (Gavino’s son) sometimes could not understand what his drunk father was saying.

This is in the third hostel “Maria Victorie”. The longest I stayed in “Compania de Jesus”, but after a while I tried to bypass the routine by just checking in other hostels. The last few days I even stayed in a hotel…. were my money got stolen.

This photo isn’t exaggerating. The last few weeks it was getting colder and colder. Etienne and I had to sleep with our clothes, socks and cap on.

Jackeline -one of the translators- used the Buen Gusto (95% pure alcohol) to warm up her place and we followed her example. With the door and windows closed it would get a little warmer, but there was also even less oxygen. At an altitude of 4200 meters, there is already 60% less oxygen in the air.
By burning alcohol in the room at night, it was indeed a bit warmer, but you’d really wake up with an headache in the morning.

We appreciate it a lot if you buy our films, so that we can continue to make important documentaries in the future. Educators and community organizations, please respect purchasing and screening guidelines.

Do I need an Institutional purchase?

An Institutional purchase (DVD or download), also known as an educational purchase, comes with Public Performance Rights, which allow an organization to screen the film for an audience, as long as no admission is charged, for the life of the media.

Do I need an Institutional purchase?

If you are inquiring on behalf of a school, university, library, gallery, or any community center (JCC, Girl Scout troops, etc.) and are not charging admission, you must purchase an Educational/ Institutional copy.
If you plan to charge admission to the screening, you do not qualify for an Educational/Institutional copy. If you are not charging admission, but you plan to use the screening as a fundraiser, you also do not qualify. In these cases, please contact us to book a non-theatrical screening of the film.